E’en like two little bank-dividing brooks,
That wash the pebbles with their wanton streams,
And having ranged and searched a thousand nooks,
Meet both at length in silver-breasted Thames,
Where in a greater current they conjoin:
So I my Best-Belovèd’s am; so He is mine.

E’en so we met; and after long pursuit,
E’en so we joined; we both became entire;
No need for either to renew a suit,
For I was flax and he was flames of fire:
Our firm-united souls did more than twine:
So I my Best-Belovèd’s am; so He is mine.

If all those glittering Monarchs that command
The servile quarters of this earthly ball,
Should tender, in exchange, their shares of land,
I would not change my fortunes for them all:
Their wealth is but a counter to my coin:
The world’s but theirs; but my Belovèd’s mine.

View all Poems by Francis Quarles 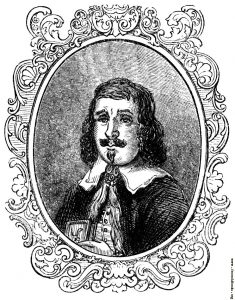