I cannot say, and I will not say
That he is dead- . He is just away!

With a cheery smile, and a wave of the hand
He has wandered into an unknown land,

And left us dreaming how very fair
It needs must be, since he lingers there.

And you- O you, who the wildest yearn
For the old-time step and the glad return- ,

And loyal still, as he gave the blows
Of his warrior-strength to his country’s foes- .

Mild and gentle, as he was brave- ,
When the sweetest love of his life he gave

To simple things- : Where the violets grew
Blue as the eyes they were likened to,

The touches of his hands have strayed
As reverently as his lips have prayed:

When the little brown thrush that harshly chirred
Was dear to him as the mocking-bird;

And he pitied as much as a man in pain
A writhing honey-bee wet with rain- .

Think of him still as the same, I say:
He is not dead- he is just away! 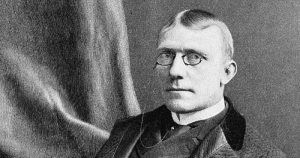