Power stepped into his hiding place:
at once a presence he could not mistake.
He begged the Angel—pure, erect, ablaze—
to leave him as he was. He would forsake

all his ambitions; it was best he stayed
that baffled, over-traveled man of trade.
He’d never learned his letters…and now such
a word! For wise men, even, far too much.

But no, the Angel fiercely showed and showed
the writing on its page. This will that glowed
would not back down, again demanding:—Read.

And then he did. The Angel bowed its head
before him, one from thenceforth who had read:
who knew, and carried out, and who decreed.

View all Poems by Rilke 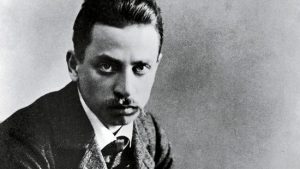