The Shield of Achilles

The Shield of Achilles

She looked over his shoulder
For vines and olive trees,
Marble well-governed cities
And ships upon untamed seas,
But there on the shining metal
His hands had put instead
An artificial wilderness
And a sky like lead.

A plain without a feature, bare and brown,
No blade of grass, no sign of neighborhood,
Nothing to eat and nowhere to sit down,
Yet, congregated on its blankness, stood
An unintelligible multitude,
A million eyes, a million boots in line,
Without expression, waiting for a sign.

Out of the air a voice without a face
Proved by statistics that some cause was just
In tones as dry and level as the place:
No one was cheered and nothing was discussed;
Column by column in a cloud of dust
They marched away enduring a belief
Whose logic brought them, somewhere else, to grief.

She looked over his shoulder
For ritual pieties,
White flower-garlanded heifers,
Libation and sacrifice,
But there on the shining metal
Where the altar should have been,
She saw by his flickering forge-light
Quite another scene.

Barbed wire enclosed an arbitrary spot
Where bored officials lounged (one cracked a joke)
And sentries sweated for the day was hot:
A crowd of ordinary decent folk
Watched from without and neither moved nor spoke
As three pale figures were led forth and bound
To three posts driven upright in the ground.

The mass and majesty of this world, all
That carries weight and always weighs the same
Lay in the hands of others; they were small
And could not hope for help and no help came:
What their foes like to do was done, their shame
Was all the worst could wish; they lost their pride
And died as men before their bodies died.

She looked over his shoulder
For athletes at their games,
Men and women in a dance
Moving their sweet limbs
Quick, quick, to music,
But there on the shining shield
His hands had set no dancing-floor
But a weed-choked field.

A ragged urchin, aimless and alone,
Loitered about that vacancy; a bird
Flew up to safety from his well-aimed stone:
That girls are raped, that two boys knife a third,
Were axioms to him, who’d never heard
Of any world where promises were kept,
Or one could weep because another wept.

The thin-lipped armorer,
Hephaestos, hobbled away,
Thetis of the shining breasts
Cried out in dismay
At what the god had wrought
To please her son, the strong
Iron-hearted man-slaying Achilles
Who would not live long. 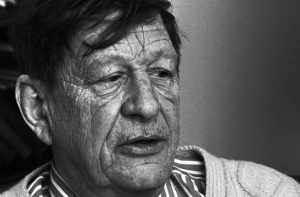 Wystan Hugh Auden, who published as W. H. Auden, was an Anglo-American poet, born in England, later an American citizen, and is regarded by many critics as one of the greatest writers of the 20th century. Wikipedia
Nationality:
American · English
Mentions in Books:
Click Here
(Learn More)
Books by W. H. Auden
Papers on W. H. Auden