Poem of The Dead Young Men of Europe, The 72d and 73d Years of These States

Poem of The Dead Young Men of Europe, The 72d and 73d Years of These States

Suddenyl out of its stale and drowsy lair,
the lair of slaves,
Like lightning Europe le’pt forth, half startled at
itself,
Its feet upon the ashes and the rags, its hands
tight to the throats of kings.

O hope and faith! O aching close of lives! O
many a sickened heart!
Turn back unto this day, and make yourselves
afresh.

And you, paid to defile the People! you liars,
mark!
Not for numberless agonies, murders, lusts,
For court thieving in its manifold mean forms,
worming from his simplicity the poor man’s
wages,
For many a promise sworn by royal lips, and
broken, and laughed at in the breaking,

Then in their power, not for all these did the
blows strike of personal revenge, or the heads
of the nobles fall,
The People scorned the ferocity of kings.

But the sweetness of mercy brewed bitter destruction,
and the frightened rulers come back,
Each comes in state with his train, hangman,
priest, tax-gatherer, soldier, lawyer, jailer,
sycophant.

Behind all, lo, a Shape,
Vague as the night, draped interminably, head
front and form, in scarlet folds,
Whose face and eyes none may see,
Out of its robes only this—the red robes, lifted
by the arm,
One finger, pointed high over the top, like the
head of a snake appears.

Meanwhile, corpses lie in new-made graves —
bloody corpses of young men;
The rope of the gibbet hangs heavily, the bullets
of princes are flying, the creatures of power
laugh aloud,
And all these things bear fruits, and they are
good.

Those corpses of young men,
Those martyrs that hang from the gibbets, those
hearts pierced by the gray lead,
Cold and motionless as they seem, live elsewhere
with unslaughter’d vitality.

They live in other young men, O kings!
They live in brothers, again ready to defy you!
They were purified by death—they were taught
and exalted.

Not a grave of the murdered for freedom, but
grows seed for freedom, in its turn to bear
seed,
Which the winds carry afar and re-sow, and the
rains and the snows nourish.

Not a disembodied spirit can the weapons of
tyrants let loose,
But it stalks invisibly over the earth, whispering,
counseling, cautioning.

Liberty! let others despair of you! I never despair
of you.

Is the house shut? Is the master away?
Nevertheless be ready—be not weary of watching,
He will soon return—his messengers come anon.

View all Poems by Walt Whitman 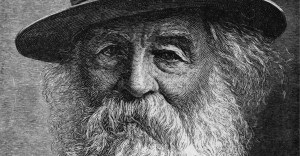 Walter "Walt" Whitman was an American poet, essayist and journalist. A humanist, he was a part of the transition between transcendentalism and realism, incorporating both views in his works. Wikipedia
Nationality:
American
Mentions in Books:
Click Here
(Learn More)
Books by Walt Whitman
Papers on Walt Whitman